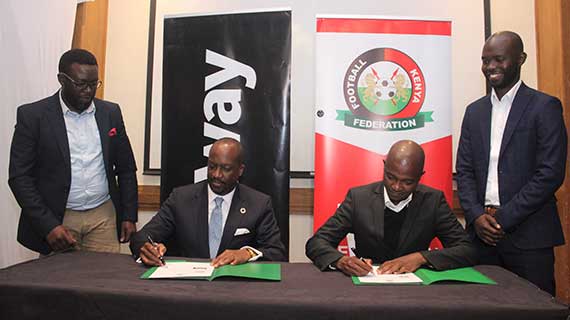 The 2020 Cup championship has so far registered 48 teams  with the winner getting the ticket to represent Kenya in the next season’s CAF Confederation’s Cup  as well as walking home with a cool 2 Million shillings in prize money.

Among the clubs that have already registered include 10 Kenyan Premier League  clubs, six National Super League clubs  as well as clubs taking part in the Division One League and Branch Leagues.

Speaking during the official launch  in Nairobi , Betway Country Manager Leon Kiptum noted that , “We are pleased to engage this vast number of football teams in partnership with FKF in a bid to make these football players’ dreams come true. The sponsorship of this cup is Betway’s way of giving back to the sporting fraternity through supporting growth of football talent fit to represent the country internationally. We look forward to the playoffs and may the best team win,”

FKF President Nick Mwendwa on his part thanked the gaming company for their timely commitment towards supporting the development of soccer.

“We wish to thank Betway for taking the bold step to partner with the federation. The decision by Betway not only cements the company’s foot print in the Kenyan football landscape but also demonstrates the organization’s commitment to continuously play a development role that deserves commendation and emulation by local and international corporate entities.” Mwendwa said.