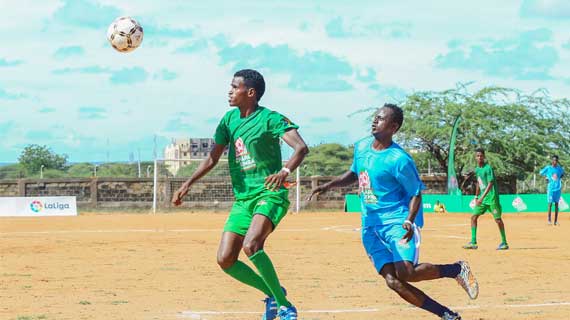 Berlin FC from Garissa has qualified for the finals of the North Eastern Regional Chapa Dimba Na Safaricom championships after a 4-0 win over Al Mumtaz from Modogashe.

A first half double strike by Abdala Maro and second half goals by  Abdi Somo Gede and Abdi Karim Bashir in the 53rd and 82nd  cruised the regional defending champions to the  finals set for Sunday at the Technical Training College Grounds (TCC) Garissa County.

Speaking after the match , Berlin FC Coach Said Ahmed Mohamed lauded his boys for tactical discipline to dislodge an equally good side,

“Al Mumtaz is not a team you take for granted going by how far they have come to reach the semi-finals. The match was tough but all along we knew we were up to the task as we had trained hard for the game. We put up a good fight, which is what helped us secure the win today. I want to thank Safaricom for putting together this tournament for the 3rd    consecutive season and urge them to keep on transforming lives through such initiatives,” He said.

Berlin will play against the winner of the second semifinals pitting Al Ansar from Wajir and Admiral from Mandera.