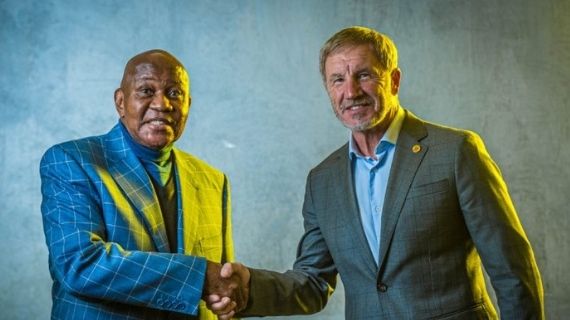 After leaving Chiefs in 2015, Baxter went on to coach a local team, Bafana Bafana and other teams outside the country. At Bafana, he worked with Molefi Ntseki and had a great working relationship..

Kaizer Chiefs have secured their new coach with the return of Stuart Baxter to Naturena. Baxter and the Club have agreed to a two-year contract  plus a two-year option as the coach of Amakhosi’s first team.

“We believe we are on track with the changes we have made so far in the coaching and technical department after a challenging season domestically,” says Chairman Kaizer Motaung referring to the appointment of Baxter and Molefi Ntseki as Head of Technical and Youth Development Academy. “After extensive reviews and consultations, we decided to appoint Stuart because we believe he is one coach who understands our philosophy and culture. We know his work ethic and believe he will work with the team we have at the moment while trying to rebuild and ensure we have a formidable side for the new season.”

After leaving Chiefs in 2015, Baxter went on to coach a local team, Bafana Bafana and other teams outside the country. At Bafana, he worked with Molefi Ntseki and had a great working relationship..

“It has been six years since Stuart left Chiefs after winning the league trophy in 2015, but he departed on good terms and remains a well-liked figure by many supporters, colleagues and some of the players he coached at the time. We believe he will be able to work within our current set up and will use the time to understand some of the players he’s not familiar with.

“We need the coach to have enough time and prepare adequately for the new season,” confirms Chairman Motaung. “We did not have a decent pre-season due to Covid-19 and other factors last season, so we hope to use the CAF Champions League journey as a part of our preparation while trying to do well in the competition. It won’t be easy, but we believe the team and the technical staff around him will help with the transition.”

Baxter will commence his duties as soon as the paper work has been finalised and he will work with Arthur Zwane and Dillon Sheppard as his assistants with support from Ntseki. The duo of Zwane and Sheppard will also continue coaching the reserve side.