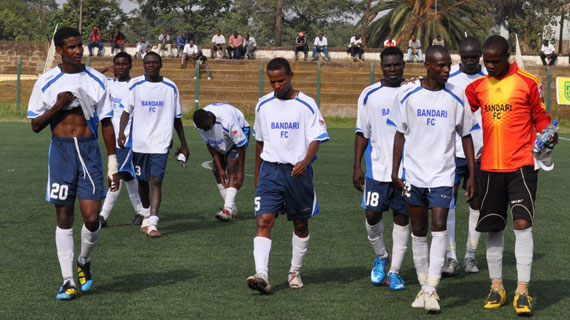 Kenyan Premier League champions Gor Mahia started their title defense on a poor footing, suffering a familiar 2-1 loss to Bandari at the Mbaraki Complex on Saturday evening. Bandari famously broke Gor’s unbeaten run in August this year and they showed it was no fluke with a similar result at their backyard.

William Wadri and David King’atua scored for Bandari before new signing Nicholas Kipkurui stepped off the bench to score late for Gor with 13 minutes left on the clock.

Gor started well and threatened early with Faruk Shikhalo being called into action o the quarter hour mark to collect a freekick from Francis Kahata. Ten minutes to the break Wadri came close but he could not connect Duncan Otewa’s delivery on target.

However, at the stroke of halftime, he made amends breaking the deadlock with a thunderous header from inside the box.

Bandari kept the pressure and seven minutes into the second half, they doubled their lead, King’atua tapping home from close range.

But the defending champions were not about to go down without a fight and 13 minutes to fulltime, Kipkurui made for a nervy end to the match halving the deficit for K’Ogalo. However, Bandari managed to hold on to the slender advantage and start the season on a high.