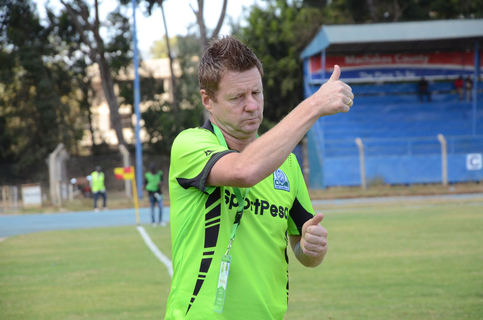 Bernard Mwalala continued to weave his magic at Bandari, becoming the first coach to break Gor Mahia’s unbeaten run in the Kenyan Premier League. Daniel Guya and Yema Mwana notched first half goals with Jack Tuyisenge pulling one for Gor 10 minutes from time.

However, Bandari managed to hold their guard despite going down to 10 men in the final five minutes of the game after Fred Nkata was sent off for a second yellow card.

Prior to the 2-1 loss in Mombasa on Tuesday afternoon, Gor’s last loss in the KPL came from the hanmds of Mathare United on 14th October when they lost by a solitary goal. The loss sees Gor’s lead at the top of the standings cut down to 11 points with Bandari rising to second, disposing Sofapaka.

With a full strength Gor squad thrown their way, Bandari were never fazed and took the game by the horns from the onset. They were rewarded just 11 minutes in when Guya glanced in a header from a corner past Shabaan Odhoji in Gor’s goal.

Stunned going behind for the first time this season, Gor tried to get their tempo back and draw level but were stunned conceding the second goal through Yema Mwana 10 minutes to half time.

Gor came back with determined hearts in the second half, looking to salvage their invincibility with at least a point. They had two good chances off set pieces, first Harun Shakava’s effort attracting an equally good save from Faruk Shikhalo while Francis Kahata struck his wide.

Gor ultimately pulled one back through Jacques Tuyisenge in the 77th minute, but it was too little too late as Bandari managed to hold their own and get the three points. They upped the pressure, forcing bandari to defend deep.

The hosts were reduced to 10 men five minutes from time, but they managed to hold on even with the numerical disadvantage for a vital three points and a dream start for Mwalala in his Mombasa sojourn.