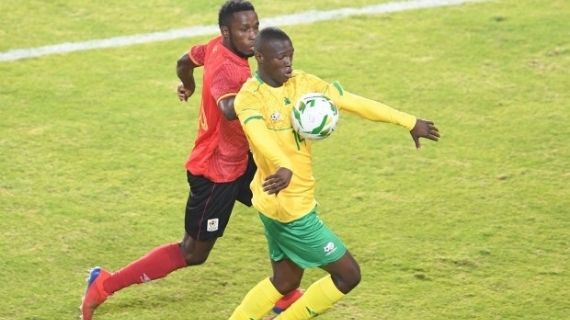 Action between Uganda and South Africa

South Africa's Bafana Bafana edged out Uganda's Cranes 3-2 in an international friendly played at the Orlando Stadium in Johannesburg on Thursday 10 June 2021.

It was Uganda who wnet ahead through Ibrahim Orit's 17th minute opener, the Cranes taking a 1-0 lead into the interval.

Evidence Makgopa then scored in the 60th minute to draw Bafana level before Bongokuhle Hlongwane gave them the 2-1 lead in the 65th minute. Makgopa then struck his brace in the 82nd minute before  Abdu Lumala applied a snap finish in the area from a corner past Williams, but it was too little too late as Bafana claimed the win.