All set for volleyball playoffs as roads lead to Mombasa 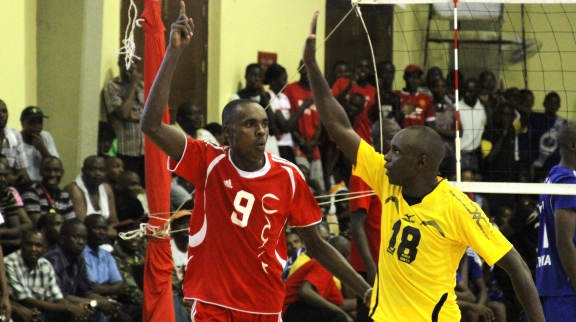 All set for volleyball playoffs as roads lead to Mombasa

All roads lead to  Mombasa this weekend as the volleyball league playoffs takes center stage at the KPA Makande Hall.

Eight teams in the men and women editions of the league will be fighting for the top honors in the nation and a ticket to represent Kenya at the 2017 Africa Club Championship competitions .

While the men's title is hard to predict , it is expected to be a two horse race in the chase for the women title as defending champions Pipeline, Prisons, KCB and Nairobi Water face-off

Since dethroning  five time Africa champions Kenya Prisons in 2013, Kenya Pipeline  have reigned supreme as the queens of local league winning back to back triple titles.

The return of  Prisons key players Brackcides Khadambi (France) , Evelyn Makuto (France)  and setter Jane Wacu (France)  who were attached to European sides has however boosted the team's performance  and  recharged their capacity to challenge for title reclamation.

A rich Pipeline squad has all the credentials to retain their title as they chase a ticket  in pursuit of their 8th African title. Pipeline have played in 13 Africa finals  winning  a record seven titles and another victory in Mombasa will see them head to the Africa championships  for another attempt after falling to Carthage in the finals  this year in Tunisia.However, despite the form book  KCB and Nairobi Water could spring some surprises.

The battle for the men's title  is expected to be exciting as Prisons, GSU, Nairobi and hosts KPA fight for that crown.

As KDF miss the finals, pundits are skeptical on putting their bets on any heads with KPA  having excited  fans this season with their ever leaping form while defending champions GSU and former champions Prisons cannot be ruled out.

With all predictions, one thing is clear , this year's playoffs promises to be scintillating and beautiful.