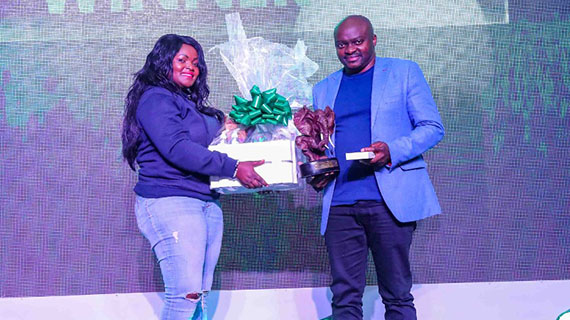 Nyanza Golf Club’s Alice Awiti is the winner of the  6th leg of the Safaricom Golf tour. Awiti posted 49 points to become the second lady golfer to win an overall prize  as she emerged top at the Edoret Leg on Saturday beating a field of 140 players. Playing off a handicap of 54, Awiti carded 23 points in the first nine and 26 on the second nine, totalling 49 points for the victory.

She fended off the challenge from Anthony Yano, Sylvia Tanui and Nilam Shah, in a four-ball tournament holing a birdie on the seventh, eleventh and fifteenth holes with three pars to emerge the tournament’s winner.

With 43 points ,home player Anand Lakhani was the winner in the men’s category while Fatma Some posted 44 points to become second best on the course.

After her win, Awiti notes that, “I have always dreamt of playing  good golf but never in my imagination had I imagined I can beat a very powerful field to be crowned overall winner.  I attribute this win to my consistency especially training hard every Saturday. More importantly, I would like to thank Safaricom for giving us an opportunity to compete more frequently because with more tournaments we get to perfect our competitive edge.”

Nandi’s Lydia Jebichii was the first lady winner having been crowned  the overall winner at the Nyanza Leg. Other previous overall winners are Cyprian Bundi (Nanyuki) , Leo Gitonga (Limuru) , Zain Manji (Muthaiga) and Simon Kimatu who won at his home club in Machakos.

The 6th leg of the tour entered its second day on Sunday with junior clinics and  juniors tournament.

After Eldoret, the tournament heads to Karen Country Club, Nairobi on May 13th 2022, before proceeding to the Nyali Golf Club on May 21st 2022.

Nearest to the Pin – Michael Kotut