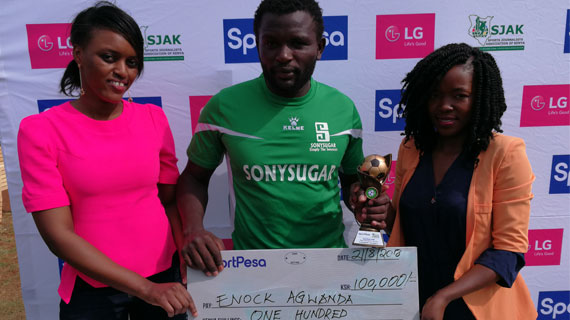 Agwanda who returned to the club in June after a short stint with second tier side Ushuru has scored twice and assisted twice helping his Sony side to move up into the top half of the league standings.

“I feel really pleased with this award. I didn’t expect it but I am happy to receive it. I thank my coach who showed faith in me and is the reason I am here today. He has helped me a lot to focus and work hard,” the burly forward noted.

With the award, Agwanda banked himself a cool Sh100,000 and a 49-inch LG Television while his teammates got an extra reward of Sh50,000.

The forward has disclosed it wasn’t an easy decision to come back to Sony, a club he left in 2011 and has had stints with Sofapaka, Gor Mahia, Bandari and Ushuru. He credits his wife and family for encouraging him to go back to the sugar millers and the decision has clearly paid dividends.

"I have to thank my wife and parents for making me return to Sony Sugar because my career has been rejuvenated. It was difficult in Bandari with the injuries but once I returned everything is falling in place." Agwanda said