Agwanda makes history with SJAK back to back award 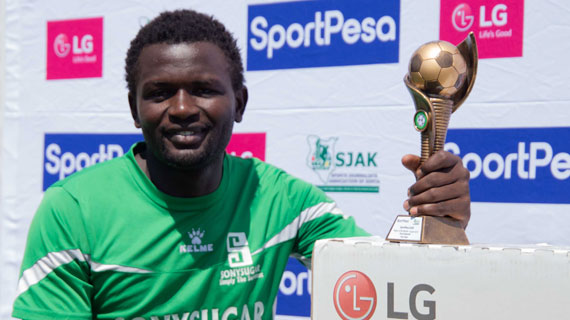 The former Gor Mahia and Sofapaka man picked up his second sucessive award after continuing with his sparkling form last month, having also been awarded with the July award same month his coach Patrick Odhiambo picked the gaffer’s award.

Agwanda, nicknamed jowi during his days at Gor Mahia got a unanimous majority vote to beat Nakumatt's Joe Waithira in the poll conducted by SJAK football committee.

Agwanda, who rejoined the millers in the mid season from Ushuru, scored four goals and provided two assists to his teammates as the Awendo-based side continued with their resurgence in the Kenyan Premier League.

The burly striker netted his first goal of the month from the spot in their 3-1 victory over relegation threatened Thika United on August 5th before scoring the lone goal of the match away to Ulinzi Stars (0-1).

He went on to hit a brace against Kariobangi Sharks (2-0) to take his season tally to nine goals as he helped Sony to move into the top half of the table after ending the month with a barren draw against Tusker.

For his impressive performance, Agwanda was awarded Sh100, 000, a trophy and a 49-inch LG TV courtesy of the sponsors, while the tenth placed side team got an extra Sh50,000 for their contribution to the player's exploits.

Agwanda couldn't hide his joy after receiving the award for a month he played with a hamstring injury. He thanked his teammates and the technical bench for making their relegation survival possible.

"It wasn't an easy decision to rejoin Sony more so after many people had written me off. But the results are there for everyone to see. We were in a difficult position when I came back but we have already made the impossible possible," said Agwanda.

"It is a great feeling to become the first player to win this award twice. I thank God for everything and the coach for instilling confidence in me. Our target still remains to finish top five.

"I thank God for his (Agwanda) recognition. He deserves it and it is a morale booster to the team.  We had targeted top five and we believe it is still achievable. Destiny is in our own hands," said Odhiambo.