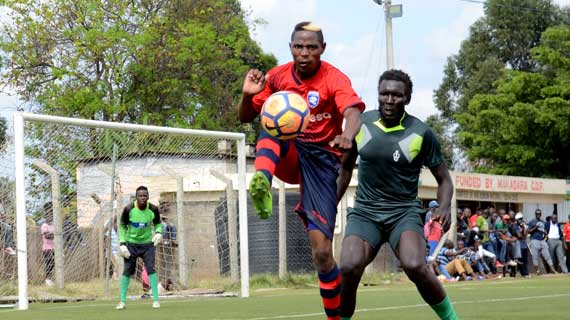 Kenyan Premier League side AFC Leopards is set to sign Rwandese keeper Eric ‘Bakame’ Ndayishimiye and Zimbabwean forward Michelle Katsvai after boith players jetted into the country on Wednesday. Katsvai chose to get straight into action after arriving playing the whole 90 minutes in the side’s friendly match against Wazito FC at Camp Toyoyo which ended 1-1.

Ndayishimiye however who was sacked by rayon Sports over allegations of faking an injury watched the match from the sidelines.

Katsvai caught the eye of onlookers not only because of his distinct dye on his hair but his prowess on the pitch as well having shown a great game despite having never trained or even known any of his new teammates.

“He did very well and I am happy with what he has done in his first game. Today, he has earned himself a contract with us,” new head coach Nikola Kavazovic said after the friendly match.

AFC went behind in the 44th minute with a penalty from Wazito new signing Stephen Owusu after Dennis Sikhayi had brought down Collins Neto inside the box.

But they restored parity five minutes from time when substitute Marvin Nabwire glanced in a header at the edge of the six yard box from a Brian Marita freekick.

“For me the result in pre-season is not very important but how we play is important. I was happy with the players and the attitude. This is a very delicate part of pre-season because the players come into the game after very intense training,” he said.

He added; “We have a lot to improve on especially in finishing and we will work on them. Right now, we are at 50 percent.”