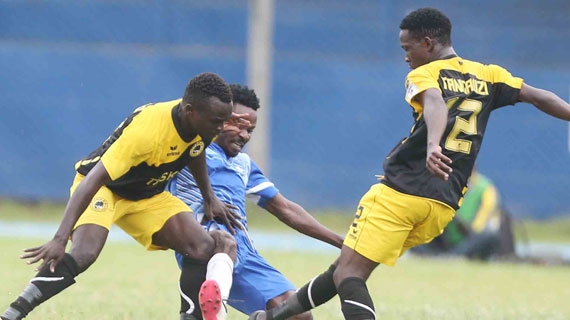 AFC Leopards drop crucial points as they play to a barren draw against Tusker n Machakos as Tusker receive baptism of fire with a 5-2 loss to Kariobangi Sharks.

AFC Leopards would have gone third on the Kenyan Premier League standings, but Alex Orotomal hit his penalty on the crossbar as Ingwe was held to a 0-0 draw by visiting Bandari FC in Machakos.

Though the ball bounced inside the line from television replays, the referee and his assistant did not see it as fans cried for VAR from the stands.

Elsewhere at the Camp Toyoyo, Kariobangi Sharks were in marauding form as they beat Tusker FC 5-2, Henry Juma and Eric Kapaito grabbing a brace each. Despite the big win, Sharks only moved a spot up in the standings to sixth.

In Machakos, Bandari new coach Bernard Mwalala continued with his unbeaten start of his career in Mombasa having won 1-0 last weekend at home against Kakamega Homeboyz. Bandari showed their intent from early enough.

In the ninth minute, Yema Mwana, a June signing from Sony Sugar was sent through from midfield but he took too much time on the ball allowing Salim Abdallah to track back and pit pressure on him forcing him to shoot wide.

AFC had the perfect opportunity to break the deadlock from the penalty spot after Ezekiel Odera was pulled inside the box by Fred Nkata. However, Oratamal’s penalty came against the bar.

In the second half AFC came back with more purpose and six minutes in, Jaffery Owiti was picked out with a well weighted cross from Brian Marita but his header from a good scoring position was over.

On the other end, Nicholas Mejja had an effort for Nakumatt with a well struck free kick from range but it flew straight to the keeper.

Quarter of an hour to time Owiti had another golden chance when he broke into the area and side stepped the keeper, but his final decision making let him down as he had a heavy touch the ball rolling out of play.

Edward Seda making his first start since returning to the club had a late effort with a swerving shot from range but keeper Farouk Shikhalo recovered in time to collect.

In Nairobi, Tusker FC took a 1-1 draw at the break but saw themselves crumble in the final 45 minutes as Sharks showed their dominance and completed their double against the 11-time league champions.

Sharks were better starters and were gifted the lead just two minutes into the game when Henry Juma capitalized on an error from keeper Patrick Matasi to break the deadlock.

However, Timothy Otieno brought them level at the stroke of half time from the penalty spot after Geoffrey Shiveka handled inside the box.

Juma and Kapaito struck in quick succession after the break to give Sharks a 3-1 advantage but Tusker revived some hopes of a comeback through John Kamau’s goal. However, the hopes were extinguished when Kapaito scored his second and Harrison Mwenda put the icing on the cake.