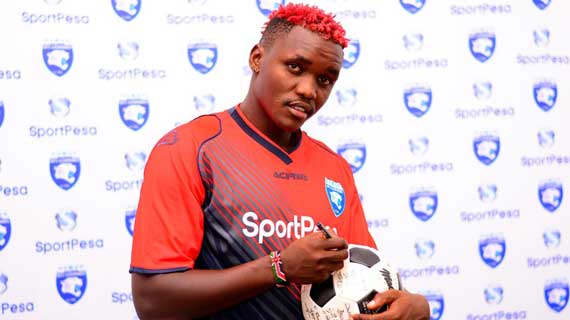 David 'Cheche' Ochieng during the official unveiling by AFC Leopards

In their path to recovery, AFC Leopards have signed Harambee Stars defender David Ochieng on a short term deal till the end of the season. Ochieng has been training on his own for the past two months since leaving Swedish side IF Bromma after their relegation to the second tier.

Ochieng inked a three-month deal with the struggling Leopards until June 11 after which he hopes to seal a return to European football.

“AFC offered me a good chance to get my playing fitness back because there are several deals I have in August but I needed to keep my fitness. Hopefully I get to give my best and help the club do well this season,” Ochieng said.

The defender had been touted for a return to Europe but the same did not materialize as he could not get a good deal.

Ochieng, nicknamed ‘Cheche’ hopes to keep his form up especially as he looks to seal a place in Kenya’s team for June’s African Cup of Nations. He will be a brilliant addition to Leopards who have just found their claws back with back to back wins lifting them off relegation