AFC Leopards new coach promises to stay at the club 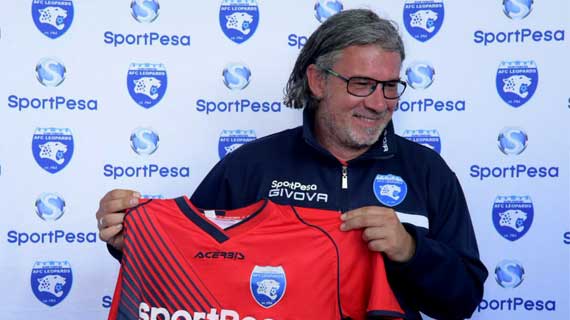 The newly appointed AFC Leopards coach has been officially unveiled by the club as he promises to turn around the fortunes at the den.

Serb Nikola Kavazovic was officially unveiled as the AFC Leopards coach on Friday and his first promise to the club and its fans was that he is here to stay. AFC have built a very strong reputation of welcoming coaches into a revolving door and this season alone the team has had four coaches in charge.

“I heard about this team almost 10 years ago and when I got the chance to be here I accepted because I want to help rewrite the history of the club and bring back the league title that has been evasive for years,” the tactician said when he was unveiled by the club.

The tactician will be charged with rebuilding the team with several high profile players said to be on their way out. Nigerian forward Alex Orotomal is already out of the club while skipper Duncan Otieno has moved to Zambian side Nkana.

The tactician said he arrived early to take charge of this transfer window and bring players he is comfortable working with. The club has already signed Zambian midfielder Shedreck Chimanya who was also unveiled on Friday.

Kavazovic has less than a month to get his squad together with the 2018/2019 season kicking off on December 8, AFC starting their campaign against FKF Shield holders Kariobangi Sharks in Machakos.