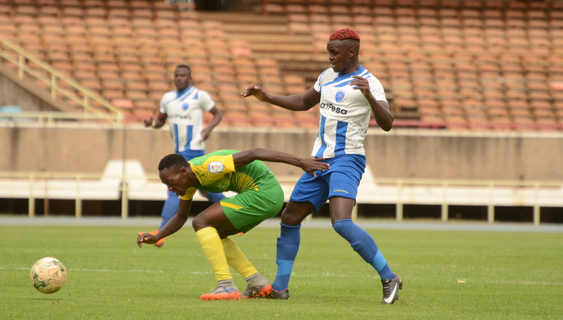 Ugandan striker George abege stepped off the bench to score a 93rd minute equalizer as 10-man Kariobangi Sharks came from a goal down to hold AFC Leopards to a 1-1 draw at the Kasarani Stadium on Wednesday.

AFC looked well on course to head in for a win after Whyvonne Isuza had tapped them ahead just 20 seconds into the game, but some poor defending in a set piece situation saw Sharks scrap for a point as their winless streak stretched to eight games.

Isuza broke the deadlock within the opening minute when he tapped into an empty net from Paul Were’s cross who had danced away from his markers on the left to cut back a delightful ball that Isuza finished with ease.

Leopards came close to a second eight minutes later when Kamura picked up a set piece from range but his powerful effort was saved by Sharks keeper John Oyemba.

Sharks were yet to register an effort at goal and in the 25th minute thought they should have had a penalty when Ian Taifa was brought down inside the box but the referee had none of it. A few minutes later, Sydney Lokale attempted an overhead kick from the edge of the box but the effort was pale, Jairus Adira collecting easily.

Two minutes later, they were almost gifted a chance when Ochieng lost the ball in midfield and in an effort to recover floored Sidney Lokale at the edge of the box. However, Nixon Omondi’s effort on the freekick was over.

In the second half, Sharks started by making changes, James mazembe coming on for the injured Patillah Omotto.

Six minutes after the restart, AFC had a chance when right back Yusuf Mainge cut into some good shooting position from the right but his low effort went just wide.

Sharks were reduced to 10 men in the 63rd minute when Taifa was sent off for a second bookable offense after a bad tackle on Isaac Kipyegon.

With their numerical advantage, Ingwe had a chance in the 70th minute when a well diced cross from Brian Marita found an onrushing Isuza, but this time keeper Oyemba raced off his line to make a superb block.

AFC had another chance when Were did his thing on the left before cutting back but substitute Ivan Sekazza could not connect into an empty net. Sharks fought and got their much needed goal, Abege heading home inside the box from a Mazembe freekick.