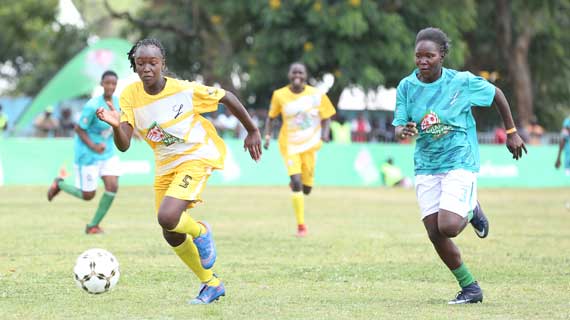 Acakoro's win  set up a mouth watering final against season one champions Beijing Raiders who beat Kibagare Girls from Westlands 3-0.

Acakoro's win  set up a mouth watering final against season one champions Beijing Raiders who beat Kibagare Girls from Westlands 3-0.

Maximila Robi’s second half brace aided Beijing to the victory, the forward striking home in the 68th and 80th minute to completely drown Kibagare with Martha Mutheu having earlier opened the scoring in the 27th minute.

Mark Okwiri, the Beijing head coach believes his side is in the right frame to clinch victory and wrestle the title from Acakoro.

“I knew the game was going to be tough because it was a semi-final. We were up for the challenge and I am happy that we emerged the winners. Come Sunday, I am confident we shall emerge victorious and I look forward to represent the region at the National finals,” a confident Okwiri stated.

Acakoro showed their mettle as defending champions as they completely outplayed their opponents, settling the duel quick and early within the opening half hour.

Catherine Omondi broke the deadlock just two minutes into the game before Florence Achieng’ and Sylvia Makungu extended the lead in the 14th and 17th minute respectively. Diana Hashina made it 4-0 in the 29th minute and at that point it never seemed that the Eaglets would find their back into the tie.

They pulled one back however at the stroke of half time through Shantel Muthoni. But, all hopes of a memorable comeback were swept away in the second half when Omondi scored her second of the morning.