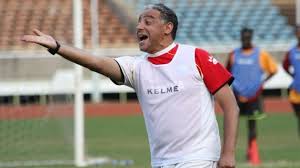 Amrouche previously coached Kenya's Harambee Stars between February 2013 and August 2014  but his five year contract was prematurely terminated by the then Federation led by Sam Nyamweya.

After the dismissal , Amrouche  filed a case at the FIFA Player Status Committee demanding compensation for wrongful dismissal in April and 2016. Even after being a warded an initial 65 Million shillings by the FIFA Players Status Committee, Amrouche went ahead to appeals to the Court of Arbitration for Sport (CAS) as he was not satisfied with the amount that was awarded to him. FIFA Later instructed Kenya's FKF  to compensate Amrouche a total of  109 Million shillings in 2019.

Responding to the statement , FKF's CEO Barry Otieno noted that "In view of the foregoing, the federation, whilst remaining optimistic continues to actively engage both the government and FIFA, with a view of finding possible solutions to enable Kenya deal with the matter conclusively and without the possibility of having to be sanctioned."

Barry continued to say that "Essentially, the federation in an effort aimed at preventing a re-occurrence of the aforementioned case that was occasioned by former FKF president Sam Nyamweya, has henceforth adopted a policy that prohibits the hiring of national team coaches, at all levels on closed contracts."

If Kenya fails to honor the payment within the said 30 days  then FIFA Could ban Kenya from taking part in all FIFA sanctioned events including World Cup and Africa Cup of Nations qualifiers.