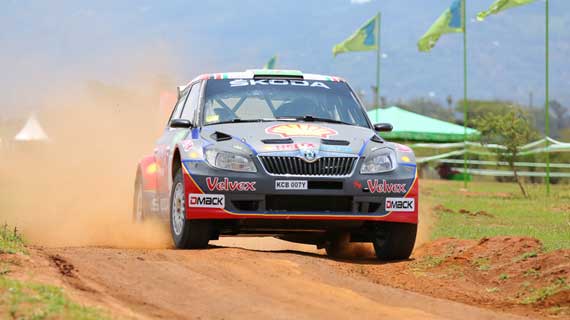 The 2019 Safari Rally this week received  a major boost ahead of this year's championship that starts on Friday in Nairobi.

This year's Safari Rally that has attracted 52 entries will be used to test Kenya's preparedness  in a bid to bring back the World Rally Championships.

The rally will be flagged off at the presidential pavilion at Kasarani Stadium at 11 am on Friday morning after which the crews will set off for a grueling 796.86 Kms around Nairobi, Kiambu and Nakuru Counties.

Apart from Kenyan drivers, the rally has also attracted drivers from Uganda, Burundi Zambia, Belgium and Italy with top car manufacturers expected to send scouts  in anticipation of World Rally Return to Kenya in 2020.

After the flag off and a spectator stage at Kasarani, drivers will head to Sopa lodge for overnight perc- Ferme before embarking on Saturdays action in Soysambu and Kedon'g on Sunday ahead of the Prize giving ceremony at 4:30 pm on Sunday at Sopa Lodge

WRC Safari Project CEO Phineas Kimathi says the route has been selected and designed to suit spectators’ needs, “Kasarani stadium is hosting the Safari for the first time and offers Nairobi fans an opportunity to watch cars competing in the city.  On Saturday, fans from Nairobi and Nakuru can view cars at Soysambu which is 10km from Lanet. Cars will go through the stage twice.  Spectators who wish can catch up with the cars at Kedong where the last car should cross the finish at 2pm”