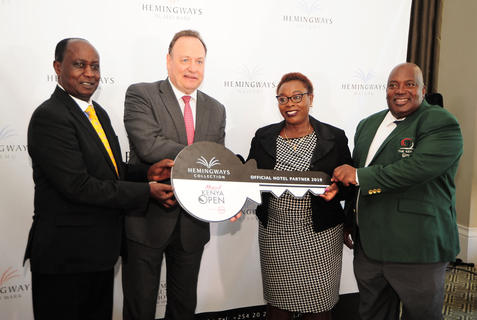 Luxury hotel operator Hemingways Collection has announced a Sh4mn sponsorship for the Magical Kenya Open 2019 golf championship that is set to tee off at the Karen Country Club on March 14.

Hemingways Nairobi will provide 48 room nights, becoming the Official Hotel Partner for the Championship that is part of the European Tour and has attracted 144 players from across the world.

Alastair Addison, Hemingways Collections Chief Executive Officer, said partnering with the acclaimed championship was part of the hotel operator’s strategy to participate in activities that promote Kenya as a preferred destination for leisure, business and sports tourism.

“We are partnering with the Kenya Open Golf Limited (KOGL) for the second season now and this year’s event is particularly dear to us following the entry of the government through the ministry of tourism as title sponsors,” Mr Addison said.

“The Magical Kenya Open 2019 is set to not only enthrall fans with world class golfing but also position Kenya as a prime venue for international sports tournaments.”

He added that inclusion of Magical Kenya Open 2019 as part of the European Tour will usher in a new era for the event and raise the profile of Kenyan players.

Kenya Open Golf Limited (KOGL) welcomed the sponsorship and expressed delight with the partnership extended so far by various sectors to support the growth and development of golf in Kenya.

“We are extremely delighted with the immense support and enthusiasm showed by Hemingways Collection over the years. Their continued support for the event speaks volumes to the kind of tournament we are going to experience this year,” said Kathleen Kihanya , Sponsorship and Publicity Director, KOGL.

“We particularly thank the board and management of Hemingways Collection for their support and great hospitality; a key component for the success of the tournament,’’ she added.

Hemingways Collection has been a dedicated promoter of tourism and conservation efforts in the country and has over the years multiplied efforts to help market the country as a prime golf destination.

enya’s flag will be flown by 18 golf players; 12 professional and 6 elite amateurs. Among the pros will include Safari Tour winner Greg Snow, Dismas Indiza, David Opati and Rizwan Charania. The amateur team will be led by Daniel Nduva of Nyali Golf and Country Club, Samuel Njoroge of Railway Golf Club and Mutahi Kibugu of Muthaiga Golf Club.

Since it begun in 1967, the event has continued to attract elite golfers from across the world. This year’s championship will be headlined by 15-time European Tour Champion former Ryder Cup captain, Thomas Bjorn.

The 2019 event will in addition mark a major milestone as it will be broadcast live by national and international media, potentially reaching millions of viewers from across the globe.