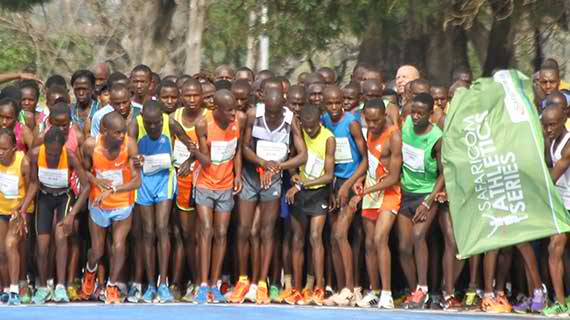 The 2017 edition of the Safaricom athletics series heads to Iten this weekend with Mathew Kiprotich leading a powerful field of elite athletes for the 10km Road Race.

Over 500 athletes are expected to take part in the race  on  Saturday, 9th September with the Series moving  to the home of champions in Elgeyo Marakwet County.

The  8th edition of the annual event received Shs 1 Million sponsorship from Safaricom bringing the total sponsorship for this race to almost Shs 7 million over the years.

The 10km Road Race was launched by elite marathoner Lornah Kiplagat in 2002 to celebrate the anniversary of her High Altitude Training Centre which has hosted the likes of World Champions Abel Kirui, Florence Kiplagat and Edna Kiplagat and Olympic Medalists Asbel Kiprop and David Rudisha.

“We expect athletes from many parts of the country because the homegrown ones have shown that the race really does benefit young people interested in turning athletics into a career. Kiprotich participated in this race last year and won the Standard Chartered Half Marathon, I believe his form improved because of the race,” said Kibet Biwott, the race organizer.

The flag-off for the race will be at the boundary between Elgeyo Marakwet and Uasin Gishu Counties along Eldoret–Iten Road at 8.30am with the finishing point at Iten Grounds.

“Our involvement in this event is a sign of our continued commitment to support athletics from the grassroots level. I am excited by the prospect of seeing Gladys Chesir – who represented our country at the Prague Half Marathon in action again. We are happy that through our support the likes of Chesir and other talented athletes have received a platform to develop their skills,” said Sylvia Mulinge, Director - Consumer Business Unit - Safaricom.

Winners of this year’s Iten Road Race will walk away with Sh.40,000, in both the men’s and women’s races.

Other races in the Series include: Ndalat Gaa Cross Country, Madoka Half Marathon, Imenti South Road Race and Kisumu Town Marathon, which will wind up this year’s edition in December.