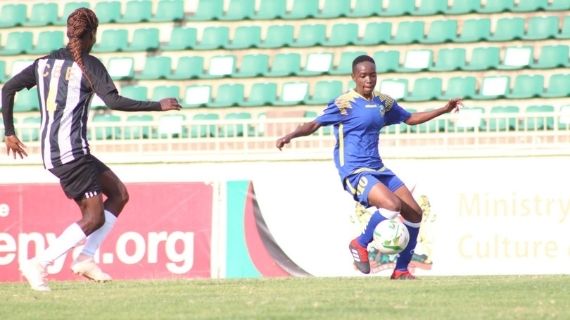 It was a different Vihiga outfit that stepped out to the Kasarani turf, casting away the demons of that 4-2 defeat to the same opponent in the group stages, as they played with intent, asking questions of their Ethiopian opponents.

They had to make do with the early injuy enforced subsititution of Alice Muderi who was replaced by Janet Bundi but still bossed possession, starving CBE of vital possession as the game progress.

Shikangwa's poaching instincts bore fruit for Vihiga, who were buoyed on by the presence of Vihiga County Governor Wilbur Ottichilo who present in the stands.  She would react quickest to CBE 'keeper Hasabe Gila's spilled clearance, Vihiga leading 1-0 on 28 minutes.

The scores would remain this heading into the interval but CBE came back a transformed side in the second, earning their equalizer on 53 minutes when Vihiga defender Vivian Makokha headed the ball into her own net from a CBE freekick.

CBE would then resort to slowing down the game, probably running out of steam, probably looking to take this game to penalties. This was not to be the case as Vihiga's Violet Wanyoyi was fould in the box deep into stoppage time, the center referee left with not choice but to penalize the Ethiopians.

Shikangwa, later voted tournament MVP stepped up, her 20 year old shoulders carrying the weight of a nation. Cool as a cucumber, composed as an assasin, audacious as an entertainer, her left foot exquisitely executed a penalty that left Gila stranded as it floated into the net.

Full time soon sounded - Vihiga winning the CECAFA title, Ksh 3 million and a ticket to the champions league in Egypt.

The queens of East African football had been crowned!