Team Kenya to camp in Japan's Kurume City ahead of Olympics 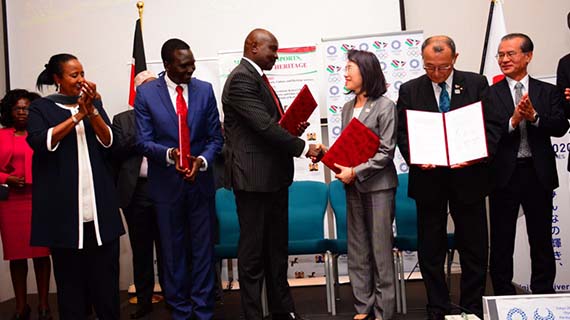 The Kenyan Olympic Team will camp in Japan's City of Kurume before heading to Tokyo for the summer Olympic games.

The Kenyan team to the Tokyo Olympics will hold a 21-day training camp in the Japanese city of Kurume before travelling to Tokyo where the sporting festival will be held in July. The National Olympic Committee of Kenya (NOCK) and officials from the city signed a Memorandum of Understanding over the same in Nairobi on Thursday.

The City of Kurume will offer the Kenyan contingent accommodation and training facilities as well as transport to Tokyo after the camp is finished.

“The MOU between NOCK and Kurume City has no monetary attachment to us but they are going to assist us and take up everything even in terms of the transport to Tokyo from Kurume City. I hope this partnership is going to go a long way,” NOCK president Paul Tergat said after the agreement was launched.

“We want to give our athletes the best preparation ahead of the Olympics to ensure that they perform well,” Tergat further stated.

NOCK had sought to get a favorable place for the team to train and acclimatize especially with the weather conditions expected to be harsh in Tokyo as it will be in the summer.

Officials from NOCK visited the city last year and have ascertained that all the facilities are up to standard. NOCK’s athletes’ representative Humphrey Kayange, who will be part of the management team in Tokyo ascertained the same.

The ceremony to sign and unveil the MoU was attended by Sports Cabinet Secretary Amina Mohamed while her Principle Secretary Joe Okudo signed on the dotted line on behalf of the Kenyan government.

“By failing to prepare, you are preparing to fail, we are winners and we must prepare very well. For us to uphold the status of being winners, it’s important that we prepare this team in the best environment possible by ensuring that they train in an environment similar to the one they will compete in,” Amina stated.

Kenya is expected to send its biggest contingent to the Olympics ever. Apart from athletes who have already attained qualification standards, the men’s and women’s rugby sevens teams as well as the national women volleyball team have already earned slots to Tokyo.

Boxers will head to the qualifiers in Senegal this coming week while the men and women’s beach volleyball teams are also firmly in the qualifiers.