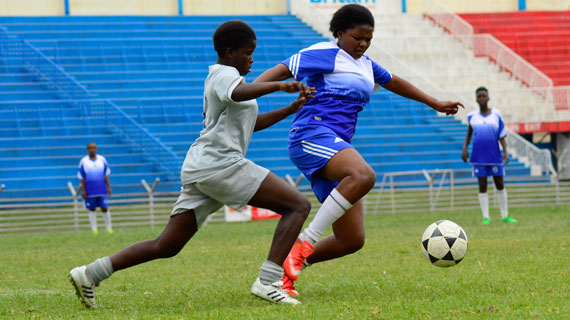 From Left Catherine Achieng' of Maina Wanjigi contest for the ball with Muthue Musyoka of Mua Hills Girls.

Defending National Secondary Schools Metropolitan Region champions Laiser Hill will only need a draw from their final group match against Ngakaa Boys on Friday to top their group after comprehensive wins in their opening matches on Thursday.

If they finish top of Group A, Laiser will most likely set up a repeat of last year’s final against Upper Hill, with the latter having won one and drawn one of their opening two group matches. They had an emphatic start, beating Utithi 4-0 but were set back with Kajiado’s Brother Beausang who beat them 1-0 via a Godfrey Bandi penalty.

Beausang top the group after earlier having thumped Kimanza 6-0 and will only need a point against Utithi on Friday to finish top. Upper Hill will need to beat Kimanza in the final group game to assure themselves a place in the last four with Utithi placed third with three points as well but an inferior goal difference.

Laiser showed class and authority as they scored nine goals in two matches to show their intent. They opened up their campaign with a thunderous 7-0 win over Muvuti, in a game watched by FKF president Nick Mwendwa.

Harambee Stars under-20 forward Kennedy Mwangi was in fine form, scoring a hatrick with Eugene Rapeno scoring a brace while Richard Odanda and Eddy Ochieng scored a goal a-piece.

Kibera’s Olympic gave them a tougher test in the second match but they managed to weave off in the second half, Chris Owino scoring a brace. Owino broke the deadlock five minutes after the restart, tapping the ball home from close range after Musa Masika’s initial shot came off the bar.

He doubled his side’s tally in the 58th minute with a superb solo effort.

In the girls’ category, defending champions Olympic finished day one on top of group B with four points after picking a point against Matuu Memorial and thumping Kajiado’s Ilbisil 5-0. Matuu are also on four points though with an inferior goal difference after beating Utithi 4-1 in their second group match.

In group A, Maina Wanjigi finished top with four points after beating Kimuka PCEA 3-1 and picking a point against Mua Hills. The latter are second with two points after another draw against Kikima.

“It is something good to come here and watch these young boys and for the national team, this is a good platform to pick players who can be nurtured from the under-20 team heading into the national team. There is some good talent here and hopefully it does not go to waste,” Okumbi said.