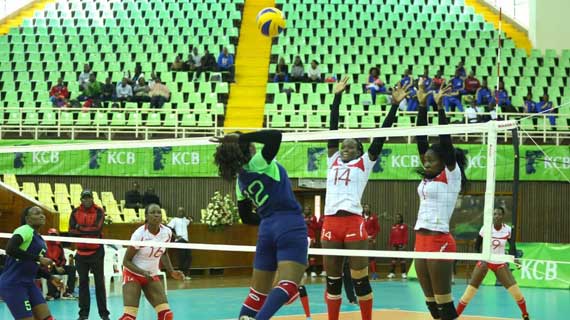 Kenya Pipeline's continental dream in danger as they were stunned 3-2 by KCB during their National league playoffs match at Kasarani on Sunday.Pipeline must beat Prison at-least 3-1 on Monday to regain their title ambitions .

Kenya Pipeline vs KCB during the National League playoffs at Kasarani

The Kenya National Volleyball League playoffs enters day three on Monday with an epic battle between rivals Kenya Pipeline and Kenya Prisons expected to thrill  at the Kasarani Indoor Arena.

This is billed to be the battle  of the afternoon as both teams must win the match to be guaranteed direct qualification to continental championships next season.

Going into the final day with one triumph against Bungoma County , Pipeline must win with a good set ratio preferably 3-0 against their long time rivals Kenya Prisons who have already picked two straight wins against KCB and Bungoma County.

Speaking from the sidelines at Kasarani on Sunday, Pipeline center player Trizah Atuka who is out of action on sick leave said , " It is what it is , we need to have this match behind us and focus on the next assignment. We need to  face Prison with a winning mentality and attack every ball with a point in mind. Although this defeat against KCB has made our mathematics difficult , we have a good chance  and I believe in my team mates."

Pipeline head coach Japheth Munala on his part noted that, " It was very difficult to chase the match as this put a lot of pressure on the players and encouraged the opponents. We however must  rise from the loss and take the next match with determination"