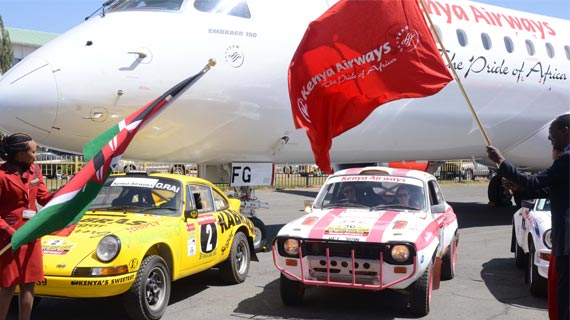 The 2013 Kenya Airways  East African Safari classic Rally  has recorded a record number of entries  from across  the world  with 60 crews already  signed  up  for the nine day long  classic rally that  will be held within November 21-29.

According to Surinder Thatthi, the event director of the classic Rally, this will be the highest number of entries since the rally was first run in 2003. The entry list has filled up months before October 1 when it officially closes.

“This is a wonderful situation to be in. It is very pleasing not only for the organizing team but also for our sponsors, Kenya Airways who have been right behind us all the way. I am sure that with an entry of this size and quality, the 2013 event will be classic rally in every sense of the world.” He said.

Thatthi said plans are underway to make the classic the best in Africa by increasing the distance and covering more than five east African countries.

“Among the urgent plans is to make the classic an annual event. We are working on the necessary procedures to ensure we hold it on an annual basis. We are also working to see that the event goes to Rwanda. Currently the road is impassible. However in future that is one area we are planning to tackle.” He said.

This year has attracted  several Porsche entries , probably inspired  by  Porsche’s breakthrough victory  on the last  Safari classic in 2011 when Porsche 911  finally won the classic  after first attempting  that feat  in 1968. Bojorn Waldergate, Ex world rally champion, four times winner of the Original Safari Rally and the driver of the winning Porsche in 2011 is back in a similar car to defend his title.

During the launch on Thursday mid morning, title sponsors KQ unveiled Ksh 20 million as sponsorship for the 2013 edition.

Titus Naikuni CEO of the airline said the company is committed towards promoting sustainable development urging the locals to be welcoming to the visitors during the rally.

“We are sponsoring the rally because of its rich heritage in East Africa and benefits it brings by selling the region as a sports Tourism attraction.” Said Naikuni.

He urged Kenyans to be peaceful as the country goes to the polls in the coming week saying Kenya is ours and there is need to keep peace always for the sake of economic prosperity.