Cavenagh and Tundo team up for KQ Classic Rally 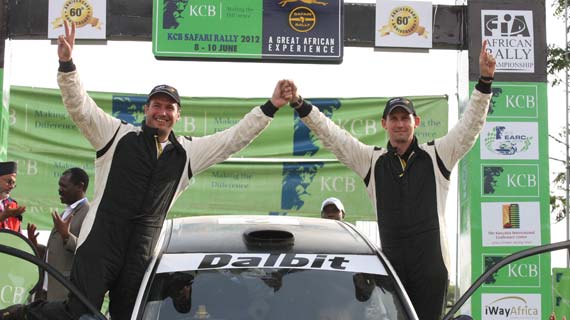 Cavenagh and Tundo team up for KQ Classic Rally

Arguably the two fastest rally drivers in Kenya Alastair Cavenagh and Carl Tundo have teamed up again for the 2013 Kenya Airways East African Safari Classic Rally that will be held between November 21-29.

The ford Escort Mark 2 model is the car the two former KNRC champions Cavenagh (2010 Champion) and reining KNRC champion Tundo will be sharing.

On the entry form, Alastair Cavenagh is nominated as the driver and Carl Tundo as the co-driver however, Tundo while speaking to Michezoafrika.Com said questions have been asked  at so whether they will interchanging the roles.

"I have been friends with Cavenagh for a long time. One can say we are the best of friends. We are looking forward to successful partnerships “said Tundo.

“Maybe this will be an opportunity for me to see how fast he can get. We shall surely interchange roles in between the races. Nine days is such a big thing.” He said