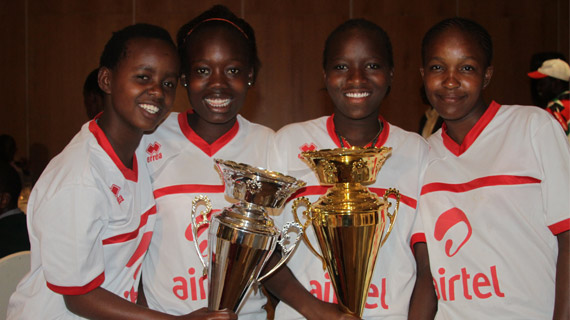 Panelists have shortlisted teams that will contest for top honors in schools category during this year’s SOYA ceremony that will be held at Moi International Sports Center on December 10, 2013.

Moi Girls were outstanding in the 2013 season winning both National and East African Secondary School Championships. Kamusinga’s victory at East African level was significant as this was the first time in seven years for a team from outside Uganda to lift handball girls’ trophy.

Tartar team is an enterprising outside from Pokot County. The team finished runners-up at Nationals and upped their game to win East African Secondary School Games in Lira, Uganda.

Olympic team finally won the nationals after four years of failed attempts. The team would them finish in bronze position at East African Games in Lira and added another feather to their cap by claiming reputable silver in Airtel Rising Stars African Secondary School Championships in Nigeria.

Upper Hill is one of the teams that would vie for top honors in boys’ category. The school was one of the most outstanding institutions during the just concluded season. Upper Hill football boys’ team emerged national champions and finished fourth overall in East African Games in Lira. Their basketball team clinched both National and East African Games.

Friends School Kamusinga recorded a double winning both Nationals and East African Games after sitting on the periphery for two straight years.

Kakamega is no doubt a rugby giant in East African region. The school that is a talent center for football and rugby dominated the sport in just concluded season winning both 15s trophy at national and East African Games. The school is also sevens rugby kings.

Hospital Hill team did for Nairobi County what other teams had failed for close to two decades when they lifted the national trophy. A third place finish at East African Games proved the pedigree of the team as a formidable side in high school games.

Kathungi arrived on the national stage with a thud after they claimed silver in football boys. But they were not lucky in East African Games as they finished outside medal brackets. But their performance back home was fantastic.