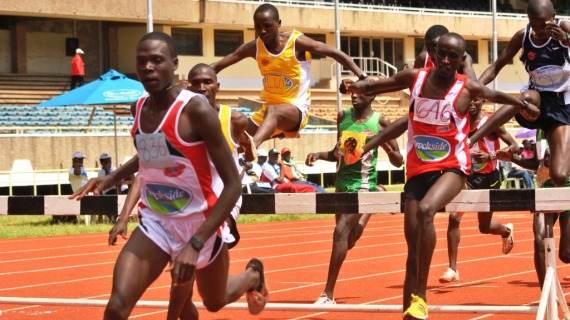 Kibet leading the pack in steeplechase

The athletics programme of the Brookside sponsored Kenya national secondary school games came to a closure at the Kasarani stadium on Friday afternoon with Simon Kibet winning the 3000m steeplechase boys’ title in style in a time of 9.08.06.

Kibet, a student at Memet Secondary School in Bomet County beat stiff opposition from second placed Andrew Maina  (10.02.6) and Joseph Mbatha(10:03.0) who came in third. The form three student earned himself a direct ticket to fly Kenya’s flag in the East Africa school games to be held in Uganda from August.

“My target was to race professionally and let the organizers do their part. I believe I deserve a slot for the championship in Uganda after today’s efforts.  I would want to emulate the country’s great steeplechase winners something I know the country is well known for. For now I have to concentrate on my school work.” He said,

The athletics and field events were initially meant to take place at the Thika Municipal Stadium but the organizers moved the event to Kasarani owing to the state of the Thika stadium. The long rains that have been pounding the country greatly affected the running track at the stadium.

Rift Valley, as always were dominant in the long distance races while Nairobi and Nyanza were the side to beat in the short races and field events.