What is in store for Kenyan sports lovers in a Jubilee government? 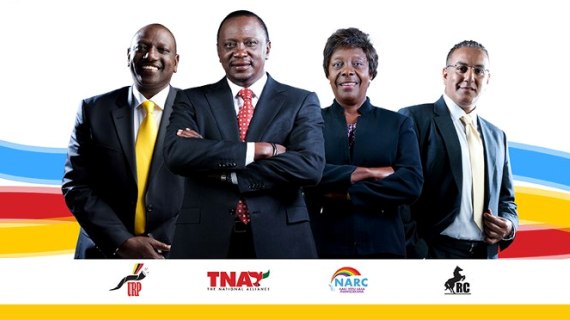 What is in store for Kenyan sports lovers in a Jubilee government?

On Tuesday, Kenya’s fourth President Uhuru Muigai Kenyatta was sworn in. Two days into his tenure and we start taking stock of what we expect of his government; the promises he laid to Kenyans while campaigning.

Of particular interest is the sports sector. What does Uhuru Kenyatta and his deputy William Ruto offer for the sports community? We have a look at the Jubilee Manifesto to jot down these promises and hold the government accountable for all they said they would do.

The Jubilee manifesto is circled around three policies; Umoja, Uchumi and Uwazi. Sports is listed among the promises of Umoja.

“Our collective love of sport and the arts is one of the strongest factors that unite us. In the sporting arena we are world leaders in middle and long distance running. At home our culture is vibrant and thriving.” reads the Jubilee manifesto.

They go on to agree that Sports has been hugely neglected by p[revious governments despite the fact that Sports has brought a lot of glory to the country especially the Kenya Rugby Sevens Team and Athletics.

“However, successive governments have too often neglected sports and creative industries. As a result, the potential in these sectors has not been accorded a chance to improve our quality of life or boost our economy. Major sporting events such as the Olympics and World Cup would provide a massive boost to local investment and growth.” Reads the manifesto.

Among the things that the Jubilee government has promised to do for Sports is to bid to host the 2019 African Cup of Nations, something that had been initiated by the outgoing Sports minister Ababu Namwamba, and in the same year, hosting the World Athletics Championships.

“The ambition of the Coalition is for Kenya to host major sporting events such as the Africa Cup of Nations in 2019 and the 2019 World Athletics Championships. To that end the Coalition will continue to support our emerging athletes in the areas where Kenya has traditionally been strong, as well as encouraging our young people to explore their sporting potential in other areas, such as rugby, cricket, basketball, swimming and football.” The Jubilee manifesto notes.

The Jubilee government, according to their manifesto, have also promised to support community sports in terms of facilities.

“We will also support the growth of sports at a local level by helping to provide community sporting facilities. The association between sport and the creative industry have long been overlooked by the government in Kenya. We believe they should be nurtured and supported. We will take measures to ensure that they are able to flourish and contribute to our economic growth and general well-being as a nation.” The manifesto reads.

If they are going to go by their word, then National teams will have better funding and better facilities through a national lottery scheme as well as a pie from the national budget.

“We will establish a National Lottery Scheme, boosted by National budget allocations to fund and support professionization of local sporting leagues across the major sporting disciplines. We will also pursue tax incentives for individual and private sector investing in Sports, Arts and Entertainment sectors.”

“We will also provide both the national teams and the domestic leagues with all the support they require while respecting their autonomy.”

Another promise made by the Jubilee government is to facilitate schools with professional coaches. If this is done, then Kenya will see emergence and development of more talents. Most European countries are better equipped in terms of talent not because they are more endowed than Kenya, but the talents are identified and nurtured from an early age.

“We will facilitate and encourage the better management of sports, facilitate the professionalization of sports through introduction of professional coaches in schools, establish youth development centres in all counties that will house a fully equipped library, an ICT hub, five sports pitches (football, swimming, basketball, netball volleyball) and a social hall.”

President Kenyatta and his government will also be tasked with fulfilling the promise of rolling out youth academies as well as the development of youth sporting structures, as said in their pre-election promise to Kenyans.

“We will roll out a network of National Academies for young people, each one specializing in a particular sports or branch of creative arts. We will also establish a series of national youth competitions, such as a national youth soccer tournament, so as to identify suitably skilled entrants for the academies.” Says the manifesto.

Also promised by the Jubilee government is the building of five new stadia in five different counties as well as rehabilitation of the sporting facilities that are already there. If this promise is brought to light, then Kenya will have a higher opportunity of winning the bids to host the said tournaments.

Also, the building of new sports facilities will increase the country’s sporting prowess. Most development of sports in the country has been hindered by substandard facilities. World over, sports is a big business and governments invest hugely in ensuring the best facilities.

Also, we might see the return of the famous Safari rally;

“We will support the Kenya Motorsport Federation to ensure Kenya gets back the Safari Rally and the WRC (World Rally Championships) calendar.” Notes the manifesto.

Indoor sports will also find a place in the new government’s agenda;

“We will fund cultural and sporting projects and facilities such as social halls in order to promote indoor sports such as boxing and to provide a place where people can meet and exchange ideas.”