Varsity derby rained off with USIU leading 5-0 against KU 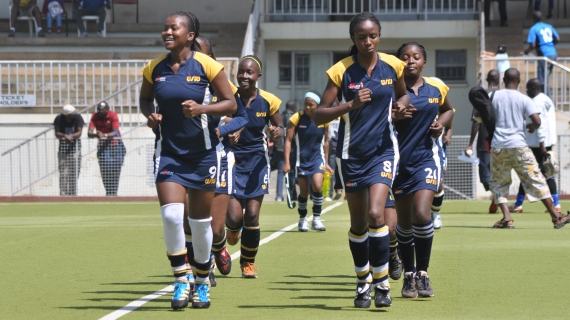 Varsity derby rained off with USIU leading 5-0 against KU

The much anticipated ladies’ varsity derby match pitting United States International University Africa USIU-A and Kenyatta University had to be called off as a result heavy downpour at the City Park Stadium on Saturday evening.

It was a sigh of relief for the Kenyatta University ladies when the match Umpires halted the match as they were trailing 0-5 with only 25 minutes gone on the clock.

The pitch was water logged after the afternoon showers and the drainage system of the turf failed again bringing the state of the pitch to question ahead of the September African Cup of Nations to be staged at the same grounds.

The turf takes approximately 7-8 hours to dry therefore subsequently affecting the other eagerly awaited clash of the day between Strathmore University and USIU in the men premier league.

USUI captain Pauline Naise whose side was cruising to an unassailable lead showed her dissatisfaction following the cancelation of the match.

“Team spirit was high and we were destined for a big victory. Cancelation of the match means the players’ morale has been hindered since we wanted to win big following our first league loss to Telkom Orange. But then again there is nothing we could do.” She said.