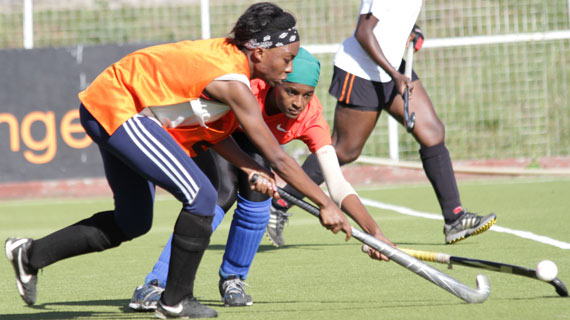 Kenyan Hockey Queens Telkom Orange have stepped up preparations ahead of the 2014 edition of the Africa Hockey club championships that kick off in Kampala Uganda on Saturday  11th January 2014.The team is expected to depart Nairobi on Thursday 9th January.

Head coach Jos Openda says the champions are in high spirits and good physical shape adding that all players have responded well to recovery training after a brief Christmas break, “I am happy at the response I have seen in the players so far.  We are back in good shape and I look forward to positive performance and a good championship.” He says.

“It is  not easy because being the defending champions we have to work harder in order to maintain the top spot. I however have very good confidence in the team; we have been training well since early last year preparing for this competition. For now we are just polishing up before we travel on the 9th.” He adds.

The team that will be captained by Betsy Omalla enjoys massive experience boasting of 10 players who recently did duty for the national team during the African Cup of Nations held in Nairobi.

Forward Jackie Jow on her part says the team will be going for nothing less than the top finish and they are all charged up for the challenge they expect especially considering they are playing away from home, “It is going to be challenging considering we are the champions and everyone will be aiming to shoot us down, but we are determined and focused. Everyone knows what is expected from them because we are carrying the hopes of all Kenyans. We will keep working harder to ensure we bring back the glory.” She said.

Telkom Orange are the defending champions of the African women club’s title having won their 8th title in Zimbabwe during the last edition of the tournament.

Strathmore University will also be taking part in the competition at the Lugogo Hockey Stadium in Kampala, Uganda.