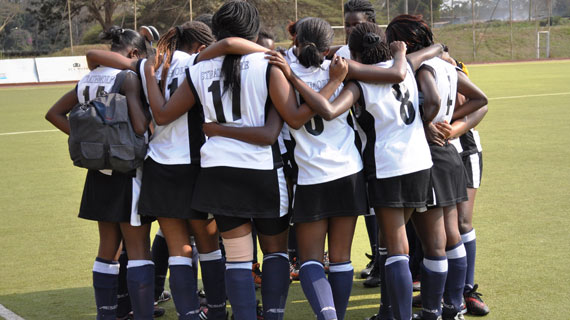 Strathmore University women Hockey team head coach Meshack Senge says her team has matured to give a shot at a podium finish during this year’s Africa club championships that begin in Kampala at the end of this week on 11th of January 2014.

“Our biggest undoing in the last edition in Zimbabwe was inexperience which we have worked on well in our training and the girls are pretty much the same having played together for a long time. Maturity is creeping into the team and we will give it a good fight.” He says.

“Compared to Telkom, our experience is relative but my girls are showing a lot of character. We expect nothing less than a podium finish.” He adds.

Averaging 22 years, the Scorpions are determined to put up a better performance than last year. Senge is expected to name his traveling team of 18 players on Wednesday after their training at the City Park.

He says his team has now gathered some good experience that should work as a motivator to boost their podium ambitions in Kampala, “We are building up well. We played against a men’s select side on Sunday and all indicators are good. The girls showed a lot of maturity playing against some of the finest men in Kenya and I am confident they will be facing the tournament with a lot of enthusiasm.”