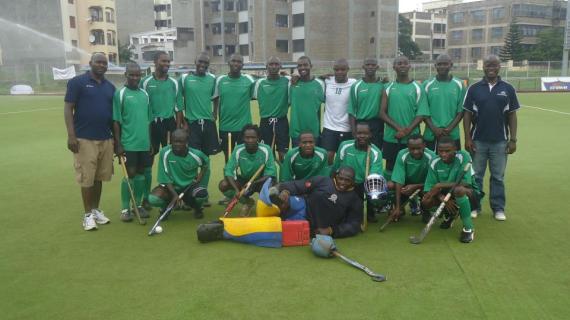 A rejuvenated Greensharks hockey club registered their first win of the season following a comprehensive 3-0 win over 2010 champions Strathmore University (Gladiators) in a men premier league match played at the City Park Stadium on Saturday evening.

History was not on the victor’s side coming to the crunch having not defeated the students in a league match with their last win dating back to 2011.

Sharks came to the match on the wake of three draws and no win in the 2013 season and were in dire need of victory as compared to their opponents. Strathmore on the other hand a side rebuilding has been hot and cold in their opening three matches with a win, lose and draw.

Sharks hunger for victory piling pressure as early as they first minute with their fluid and flair style as opposed to the characteristic rough approach to matches that has been associated with the side.

Lawrence Odhiambo and Samuel Mucheke combined well, in the third minute but Strathmore custodian Lewis Mawira was alert to prevent them from having an early lead.

Captain Tony Nyukuri who was enjoying much pace on the left flank threatened with long cutting inside out Hillary Soita however his final touch did not pose much threat.

After quarter an hour Sharks hard work was finally repaid with a quick counter attack revolving around midfielder Kevin Simiyu, Nyukuri,  Edwin Otieno who set in advancing Mucheke to lot in  from close range.

Hosea Walucho captain of the students showed class of experience on more than a couple of occasions interrupting quick counter attack from Sharks who should have taken a bigger margin going to the break.

Sharks completed the remarkable victory with a Andrew Young field goal with 14 minutes to the end. The win took them to second in the log with seven points five less of run -away leaders Kenya Police. Strathmore are in fifth with four points.