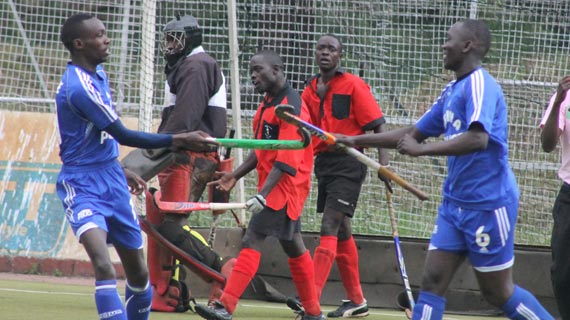 Former hockey champions Kenya Police are plotting a hot revenge when they play Wazalendo on Saturday in an expected explosive league match at the City Park Stadium.

The cops who are the 2011 champions relinquished the league title last season due to the two defeats against champions Nairobi Simba Union and the Wazalendo.

The game against Waza during last season’s opener defined the season for the then champions who never recovered from the ordeal as they eventually lost the title.Despite a late surge from the law enforcers, the league had already eclipsed through their hands to the comfort of the current holders who were more suited and equipped for glory.

Going to this weekend’s match, police riding on a perfect run of matches to the season are looking forward to nothing but maximum points.

“Waza is a very good side with a mixture of young and experienced players. We might have underrated them last season leading to a bitter defeat. I want to state that there will be no room for mistakes this time.” Assured team Captain Richard Birir.

The captain said there is a lot of ammunition to hand second placed Waza their first defeat of the season, “ We have won all our matches giving us a comfortable 100% start so far. We have enough forwards to get the work done. Samuel Wokila, Oliver Echenje and Willis Okeyo are playing advanced roles chipping in with crucial goals. We can’t forget the inspirational Moses Cheplait who never disappoints when we need him,” Continued the midfielder.

The captain referred to the Tanga Phoenix hockey tournament in Tanzania where they defeated Moshi Khalsa 5-1 to lift the cup for the fourth time, “We take credit for playing a very good side with international players. They had six players from Pakistan but we managed to cage them something that called for great teamwork. Our season has been good and we want to move higher.” He explained.

Asked of his opinion on the competitiveness of the league, the player says, “The league is unpredictable at the start. Simba the champions and Strathmore University were the sides to watch, however the two have already surrendered points. We are learning that Kisumu Simba has a good side too. There might be more upsets trust me.” He concluded.