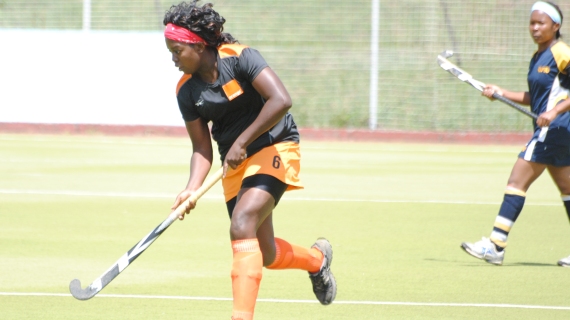 Telkom Orange reclaimed the top spot of the women’s national league with a 3-0 win over Vikings in a league match played the at the City Park stadium on Sunday morning. The reigning champions moved to nine points in the log from after recording a 100 percent win in their opening three matches in the 9 team ladies league.

The telecommunications sponsored side were coming to the fray following a month without action from their 7-0 win over United States International University Africa (USIU-A). The other win was against Sliders hockey club in the opening round of fixtures.

Forward Margret Rotich hit the back of the board twice in a span of two minutes in the first half with Carolyne Guchu scoring one in the second half.

In the men’s national league Wazalendo Youth moved to second in the league standings with 8 points from four matches with a 4-2 comeback against Parklands. The youth side stunned the reigning national champions coming from a goal down to eventually win 4-2.

Gideon Kamunge scored a brace, with Peter Mulati and Erick Ochieng scoring a goal each as they outplayed the side that declined promotion to the top flight hockey last season. Match captain Simon Mwangi who joined the club at the beginning of the season had a great match providing two assists in the match.

“We played match better after we equalized with my team-mates playing attacking hockey. We dominated the midfield therefore denying our opponents supply of balls.” said the play maker. Mwangi also praised the link between the midfield and the attack especially the two forwards Ochieng and Kamunge who used their speed to overrun the defenders.

“We play as a unit all the time attacking and defending well. Our keeper Bright Kazengwa was my man of the match following a series of amazing saves especially when we were trailing.” He added.

Wazalendo are unbeaten in the league and have scored 16 goals four points behind first placed Nakuru club.