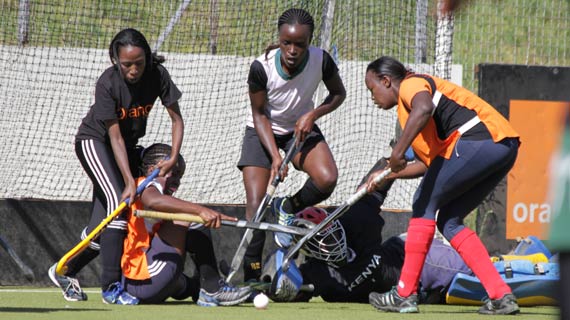 Africa women hockey defending champions Telkom Orange will be without experienced Jacqueline Ogot who underwent surgery last weekend after being involved in an accident in training on Friday last week.

Ogot was hit with the ball in training after it bounced off her goalkeeper and needed several stitches to seal up the tear in her upper face.

Despite her injury, coach Jos Openda says she may be part of the traveling squad as she is being groomed to take up leadership and technical role on the team’s bench.

“We will be able to assess her recovery. She will definitely miss our pitch action but she has been taking up coaching roles and could be a very important person on our bench now and the future.” Openda said after Sunday’s training at the City Park.

Telkom depart Nairobi on Thursday for Kampala Uganda where they will be out to defend their African club title. The tournament starts on Saturday 11th January 2014 at Lugogo stadium in Kampala.