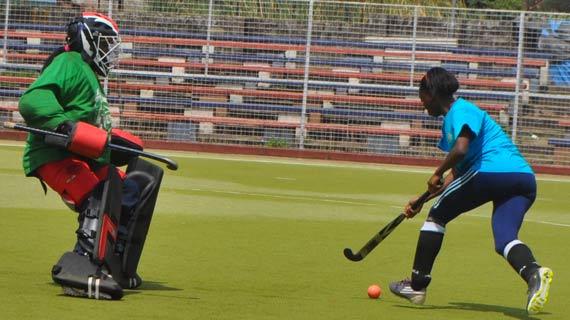 By AMOS ABUGA 19 Jul 2013
The National Hockey team that was to travel to Ghana to take part in a one week test series starting next week at the West Africa nation’s capital Accra will not be traveling after all as the government has pulled out from sponsoring the trip as earlier promised.
Confirming the new development, Kenya Hockey Union second vice chairperson Ellyna Shiveka disclosed that the government had promised to sponsor the trip but opted to pull out of the deal.
“Yes it’s true the team will not be travelling to Ghana on Monday. The government had promised to support the trip but informed us yesterday that they are not able. It’s very unfortunate.” Disclosed the vice chair.
The national team was to travel to participate in a tournament to commemorate the first anniversary of their president late Atta Mills who was a hockey player and played a big role in developing the sport in the country.
The players and coaches alike had welcomed the trip that could act as a build up match before the country hosts the 2013 Africa Cup of Nations in Nairobi from 26th September to 6th of October at the city park Stadium.
The International Hockey Federation (IHF) and the African Hockey Federation (AFHF) gave Kenya the hosting rights to the most prestigious tournament in the continent early this year.
The tournament will also act as the Africa qualifier for the World Cup after Egypt withdrew as hosts. The top two teams in the men’s and women’s categories will qualify for the senior World Cup to be staged in June, 2014 in the Netherlands.
This is the second time Kenya will be hosting an international qualifier. The first were the Beijing Olympics qualifiers in 2007 in Nairobi.
Read more on : Hockey