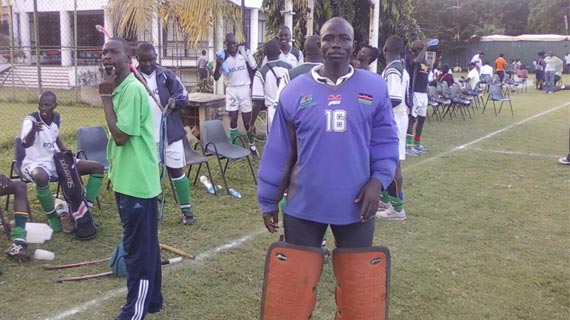 National hockey men coach Meshack Senge is not bothered by the opponent’s giant tag as Kenya prepares to get 2013 hockey Africa Cup of Nations underway against North Africa power house Egypt on Monday.

The Kenya team has been in vigorous training for the past couple of months prompting the coach to say they are ready to face any team in the championships.

The one week championships was supposed to take place in September but had to be pushed backward after the September Westgate terror attack.It was however blessing in disguise for Egypt who had initially pulled out of the championships due to political instability in Cairo.

With the postponement, the Pharaos re-grouped and made a U- turn to take part in the championships that will see top two teams head to Netherlands for world cup in June next year.

“Egypt initially not coming was an advantage to Kenya.” admitted Senge, “but now we have to put them in our plans and playing them in the opener won’t be easy. We have to give our all.”He said.

“We have had sufficient time to train with my players psyched up to play at home. Being runners up to South Africa in the continent is not a mean thing for them.” He added.

The coach said he has the players to play in different kinds of matches especially fast and slow games, “The experience and young players have blended very well. I can confirm the team is in the right state of mind to play and win for the Kenyan fans.”He added.

Senge however warned his players to be coy of the North Africans especially on the short corner set pieces saying they are the best.

“You get punished dearly from such mistakes. Taking our chances and minimizing on mistakes will be our style.”  He concluded.