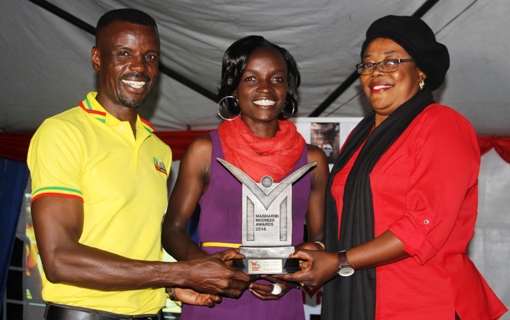 National team captain Betsy Ommala was on Friday evening named the 2014 Magharibi Michezo Awards  Player Of The Year at a gala dinner held at Mashariki Sports Leadership College in the western town of Bungoma. She was also rewarded with Ksh 50,000 apart from the individual trophy.

Omala, who led Kenya to qualify for second round of the World Hockey League, was pitted against Sofapaka’s Ekaliani Ndolo, Kenya sevens’ Bush Mwale and Kenya Prisons volleyball’s Michael Chemos.

MMA Patron and Webuye Member of Parliament Dan Wanyama said, “ This awards initiative is a noble idea that gives recognition to all cadres of sports personalities from the Western Kenya region and we give credit to the organizing committee and everybody else involved in ensuring that it comes to fruition.”

Christine Wasike, the Chief Officer in the Bungoma County Ministry of Sports and Education said, “ This awards ceremony is very much in line with some of the ideals and policies of our ministry and we are very grateful to the event organizers for coming up with this noble idea.”

Overall MMA Player of the year

Best Footballer of the Year

Community coach of the year