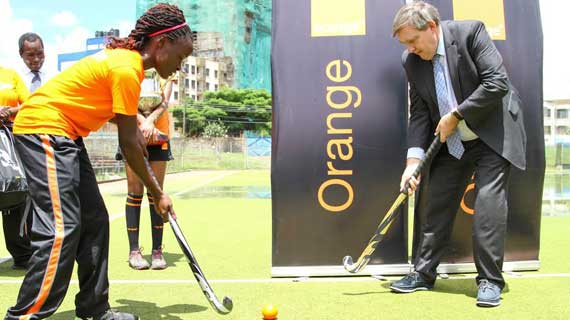 Africa Hockey women champions Telkom Orange on Monday landed a major boost when sponsors Telkom Orange handed the team 5.8 Million shillings to support the club ahead of their trip to Bulawayo Zimbabwe for the 2014 edition of the club champion ships.The tournament will be held starting November 22nd .

Telkom seeks to consolidate their supremacy in African hockey as they go out for a third consecutive African title to add on to their firm grip of the National League which they have won for the past 15 seasons.

Company CEO Vincent Lobry while presenting the sponsorship to the team on Monday said the success of the ladies’ team had exemplified that with corporate support, talent can be nurtured in sports other than the more popular athletics and football.

“We saw an opportunity to help grow young talent in hockey and the result has been a ladies’ team that is not only competing for continental top honors with the best from Africa, but actually winning the title six times.”