Kenyan U-23 soccer team finally jets off for Asmara 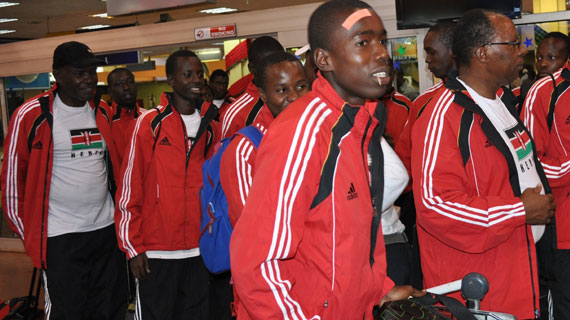 Kenyan U-23 soccer team finally jets off for Asmara

The national U-23 soccer team finally jetted off for Asmara Eritrea on Saturday afternoon .The team will be hoping to book a place to this year’s All African games set for Maputo Mozambique later in the year.

The plane carrying the team departed JKIA on Saturday shortly before 2pm.The team had been scheduled to play Eritrea on Friday but the failure to acquire a direct flight to Asmara forced FKL to request for the match to be rescheduled to Sunday.

The unavailability of an immediate flight back to Nairobi in time after the match on Sunday will see the team stay over in Asmara for a week as their return flight is booked for Saturday next week on 23rd April.

Team manager Benson ‘Kisco’ Kariuki speaking shortly before their departure from JKIA said they will use the time to play friendly matches against Eritrean clubs in preparation for the return leg in Nairobi.

“There is only one flight from Nairobi to Asmara each week and it was very hard to get tickets in time. We shall also be forced to stay over there for a week because of the same flight connection problem. Said Kariuki.

The return leg to the match will be played in Nairobi in a fort night.