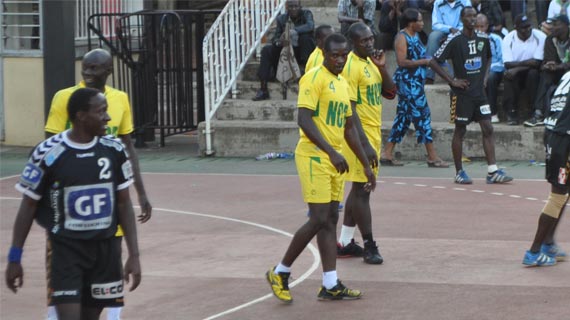 The semi final match between defending champions Kenya National Cereals Board and The University of Nairobi in the ongoing East and Central Handball Club Championship had to be postponed due to the darkness that engulfed the Nyayo Handball Court on Friday evening.

The game had to be stopped after both teams complained of poor visibility and the match will resume on Saturday morning from 9 am. By the time the match was halted, UoN were leading Cereals with 14 goals to 11. The match was stopped in between the first 10 minutes of the 2nd half.

In the other semi final match (men’s category) AS Police had an easy time past Prisons from Uganda 34-18 to book a place in the finals. Police will know their opponents after the Cereals/UoN match.

In the ladies category Nairobi Water who had earlier edged out Defending Champions Cereals 16-15 in the 1st semi final match will meet Heritage from DRC Congo in the finals of the tournament after they whitewashed Police from Congo 38-11 in the 2nd semi final match.