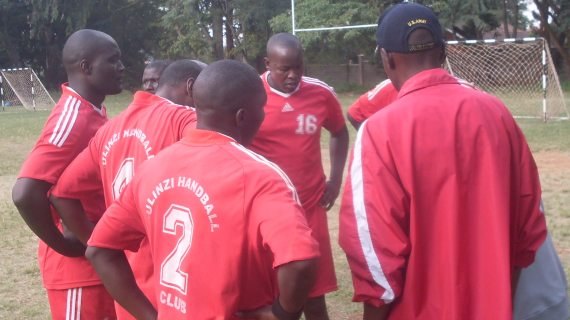 Ulinzi Handball club claimed the second edition of the Kenya Defence Forces Chairman’s cup in a thrilling final played at the Nyayo handball court on Sunday evening. Ulinzi rallied from 4 goals down to beat Nyuki 18-17 in a fully packed court.

The first half had seen Nyuki dominate with 12 goals at the half time break with Ulinzi trailing with 6 goals. In the second half, Ulinzi’s tactical change coupled by a series of errors by Nyuki saw the Defence Forces side overtake Nyuki with a single goal the scores being 17-16 with three minutes to go.

Kenya International Davis Odhiambo who was on top form throughout the four day tournament for Nyuki had the chance to equalize the scores with a penalty after winger Cerry Otieno was fouled but Ulinzi kepper Joseph Ombok did well to deny him. It was only in the last play of the match that Odhiambo scored to give Nyuki the 17th goal before which Ulinzi had capitalized on a fast break to ensure they retained their title with a two goal gap.

The Ulinzi women’s team also retained their title after emerging top in a series of round robin matches played in the category. Kahawa Barracks came in second while Moi Air Base was third after they were handed a walk over, over Kenyatta University who arrived late.

The tournament which saw 19 teams participate was used as a gauge by the various participants as the 2013/2014 KHF League beckons and will see the return of Ulinzi after a one year break.