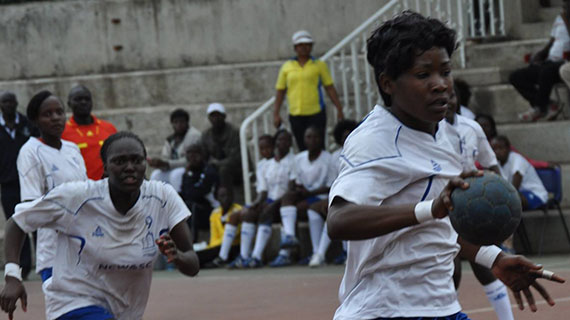 On Song Nairobi Water women’s Handball team have retained their national title after outwitting their arch rivals National Cereals Produce Board 20-16 in a balanced contest at the National Handball playoff  final played on Sunday afternoon at the Nyayo National Stadium hand ball court.

Left handed Cecilia Katheu of Nairobi Water was a constant pain for Cereals causing havoc  in defence netting four times combining well with her team mate Judy Augoh who emerged as their top Scorer with 5 goals.

An elated Nairobi Water team manager Caroline Kusa  while speaking after the match said ," We are happy to have won. We played a slower game in the first half maintaining a two gap goal but in the second half we executed our training drills very well."

She adds that  "Handball is about speed and we capitalized on speed that’s why it was difficult to contain us."