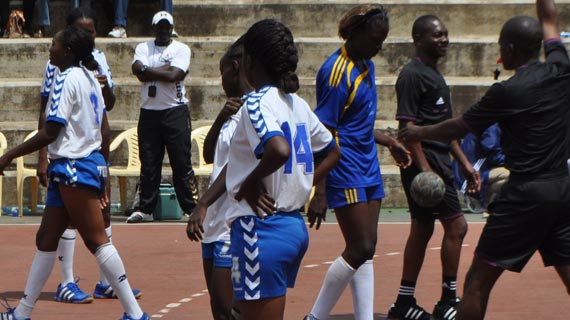 Nairobi Water handball club survived a scare as they held on to beat a stubborn Nkumba (Tornados) University from Uganda 31-24 at the Nyayo handball court on Thursday afternoon in the ongoing East and Central handball club championship.

The tightly contested and physical match saw both teams hold their ground and by the end of the first 5 minutes Water had scored only 2 goals compared to Nkuba’s zilch. Nkumba managed to settle in the match and some point led the Water Queens by 9 goals to 5 forcing the Kenyan team to take a time out.

Jack Ochieng the Nairobi Water coach pushed his side and also made crucial substitutions that bore fruit and by half time Water led the university students 13-11. The second half saw a more aggressive Nkumba and this resulted to the team getting many fouls at their expense and also right back player Namwaya getting a red card after elbowing Nairobi Water center Michelle Adhiambo.

In the last 15 minutes of the game, Nkumba made costly blunders that Water capitalized on especially on the 1st breaks and they managed to open a 7 points lead with less than 5 minutes to go. Merina Andala the captain of the team scored 7 goals same to Judy Augo to ensure Nairobi Water book a semi final spot against defendingchampions Cereals. Soigi Martha was the top scorer for the Ugandans giving them 10 goals.

Speaking to michezoafrika.com,  Nairobi Water team manager Mary Musau pointed out that it was a tough match but they were happy with the win and that the main concern was the injuries that the team had,

“It was a tough match but at the end we won, our worry is on Caroline Kusa the goalkeeper and Winnie Otaya who got injuries during the match. They have already been taken to receive medical attention and we will see how they fair on.”

Nairobi Water will face Cereals on Friday from 11:30 am.

In the earlier matches Strathmore University managed to beat Kenyatta University 17-13 in the continuation of the match that was halted at half time yesterday afternoon due to rains. University of Nairobi beat Mombasa 33-22 in the second match of the day.