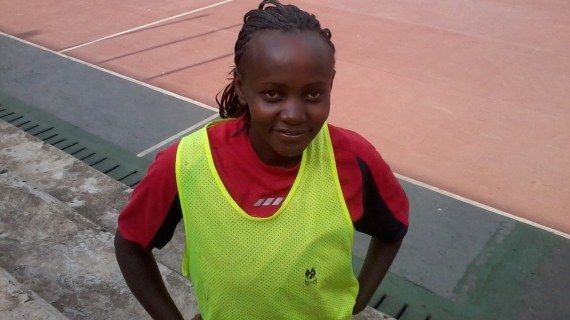 Merina Andala the 2012 Most Valuable Player in the ladies category of the Kenya Handball Federation League was overwhelmed after her team Nairobi Water Queens, won the league for the first time on Sunday at the Nyayo Handball court.

Nairobi Water had beaten National Cereals and Produce Board 27-18 in a repeat of the 2012 play offs finals. In the last season Cereals had managed to hold off Jack Ochieng’s side with a one goal margin the scores being 27-26. According to Andala who turned out for the former champions Cereals before shifting alliances to Nairobi Water their win was because of the strong foundation the team had laid way back,

“When we lost last season with a very small margin we were determined to redeem ourselves and we started training very hard immediately. The results started showing in the East and Central Africa Championship where we reached the finals and on our way there we beat Cereals.”

“We continued to train intensively throughout and by the time we were in the play offs we were confident that this time round we would win the league with a clean margin.”Andala says.

The team now has shifted its focus to claim regional glory a point Andala states they hope to achieve, “in the East and Central region, Heritage from Congo is the team to beat. We met them here at home and then when we travelled to Morocco for the Africa Club Championships we faced them again. With what I have seen we are able to beat them if we put ourselves up to it.”

Andala heaped praised to her team and she hopes that they will continue with the great road to success, “we have just started and I thank God and the whole of Nairobi Water as we start this journey to greater heights.”