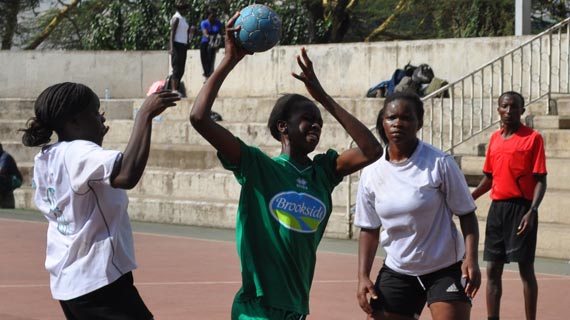 The Kenya Handball League play offs kicked off on Saturday with  a total of  5 games played . The last game of the day between Army side Gunners Artillery and Kenya Polytechnic was stopped in the second half due to unforgiving rains that rendered the Nyayo handball court unplayable.

In earlier matches, Cereals women’s team beat Jericho youth in a one sided match. The defending champions were physically superior and by half time the scores were at 15 – 8. In the second half the story was the same and the game ended 35 – 18.

Cereals men’s team also powered their way into the semi-finals beating University side  Strathmore 26 – 17 in game one  and Kenyatta University 38 – 23 in the second match that was marred with  irregularities from the referees.

The  East and Central Africa Club Champions capitalized on Kenyatta University’s weak defense line to easily cruise through the porous spaces for a win that earned them a slot in the semis.

Kenyatta University’s head coach Tobias Onyango blamed the absence of most of his first team players for the display but conceded defeat  ‘’we gave all our best but at the end of the game there is only one winner. I missed the services of some of my players but now we are focusing on tomorrow’s matches.’’

Cereals’ team manager Maxwell Zange had nothing but praise for his team and expects more when they play the semis tomorrow,  “it can only get better’’ he simply said.

Their match which was halted with scores at 16 – 15 in favor of the students due to rains will continue tomorrow.

The match was stopped with 24 minutes remaining to the final whistle
.
The play offs continue on Sunday.