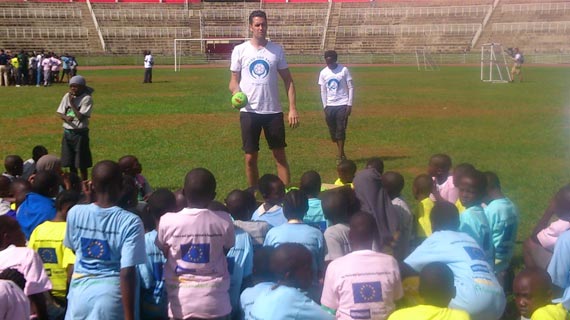 Denmark based Street Handball Organization this week participated in the Peace and Sports Festival in conjunction with Jericho Youth Sports Association and the Kenya Handball Federation.

The organization has been supporting 8 centers around the slum areas of Nairobi County and part of its agenda for the trip to Kenya was to follow up on the progress of the Street handball concept in Kenya which began in February 2010.

Street handball is a form of hand ball that is mainly played by kids, where there is no physical contact and played with a special soft leather ball. It is regarded as an ideal way of teaching the basics of handball and entertains the children at the same time. It was developed by the Danish Handball Federation and a number of professionals including Lasse Boesen a top player in Denmark (turned out for KIF Kolding) who was also present at the festival.

The aim of the festival was to promote peace and cohesion in the upcoming March 2013 General Elections through inter-ethnic dialogue, interaction and awareness. The festival was held at the Nyayo Stadium thereafter an exhibition match between a Denmark select team versus a Kenya select team. The Danish team comprised of former Denmark National team players.

Speaking to michezoafrika.com after the festival, Peter Mwathi one of the facilitators of street handball in Kenya and also the Strathmore University handball coach was delighted with the success of the festival and hopes in future more of such events will be held,

“We had more than 400 kids from the different centers and this is a huge success. Our aim was to make the kids enjoy themselves and at the same time learn how to live with one another and we achieved that.”

Charles ‘Jaji’ Omondi the fixture secretary also welcomed the project saying it is a positive move towards promoting handball in the country, “we are really honored to have some of the former top handball players in the world amongst us. Some of them (Danish travelling team) have won world championships with numerous caps to their names and this is a huge boost towards sensitizing handball in Kenya.”

Lasse Boesen reiterated the main aim of street handball and the impact it has on the children, “it is supposed to be fun and enjoyable at the end of the day that is what is most important.”

And on how to be a top player in handball Boesen said it’s all in hard work, “as a player its hard work. You need to put on extra hours apart from the one you get at training or the coach gives and you will make it.”