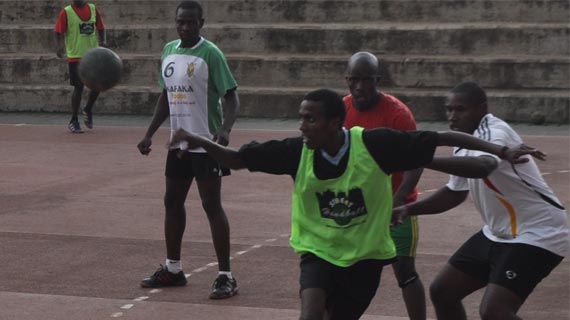 Persistent rains forced the match between Strathmore University and Kenyatta University to be stopped at half time since the slippery court was unplayable as the East African Handball competition entered day four at the Nyayo stadium.

The tense match saw none of the two teams score in the first 4 minutes but it was KU who were the first to draw first blood. Strathmore rallied back with 2 quick goals and by the end of the first half the scores were 7-4 in favor of the Madaraka based side. The match is scheduled to resume on Thursday at 8 am at the Nyayo handball court.

In other matches played on Day 4, defending Champions National Cereals and Produce Board of Kenya continued their dominance in Pool A of the men’s category after they thrashed NYS (Kenya) 46-15. AS Police from Congo also stamped their authority in Pool B after crushing Mombasa Based Glorious Handball Club 41-9.

In the women’s category, St. John’s from Kenya lost their 2nd match after falling 35-17 to Cereals on Tuesday when they were beaten by Police 35-19. Police were clearly the more experienced side of the two and capitalized on the blunders that St. John made. The Cereals women’s team also made sure that they remain at the top of their Pool after they beat Ngome from Tanzania 29-17.

The Dar es Salaam side had just arrived in the country the night before after more than a 16 hour bus ride and exhaustion was clearly visible in their play.

Victor Siero the Cereals coach admitted that the team was a good side and they would pose a threat on their matches to come, “I know Ngome very well and they are a good side, the long journey from Tanzania might have affected their game but the other teams will have to watch them. They cannot be ruled out.”

In the match Alexima Ambani scored 6 goals for Cereals.