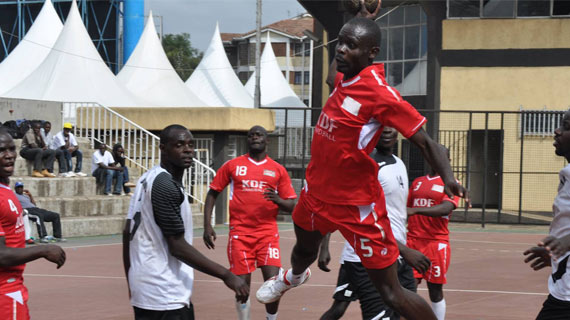 The traditional Handball rivalry pitting Cereals and Ulinzi men's team was renewed at the Nyayo national Handball court on Saturday when the two teams faced off in an early Kick off during the ongoing National Handball Play offs with Cereals overpowering Ulinzi 30-21 in a colourful match.

Cereals were first off the blocks leading the scoring table at half time 17-07. Thedeseus Sangor led the charges for Cereals men with his 9 goals being the highest while Nicholas Ireru scored 8 for the Kenya Defence Forces.

In other fixtures of the day, Kenyatta University locked horns with their academic counterparts Strathmore University in the days most closely fought but entertaining match. Both teams were separated by a single goal 10-09 at half time before the Thika Road based team held on the win the contest 23-21 against their hard fighting Madaraka based Strathmore University.

Black Mambas Venom was not lethal to neutralize KDF as they went down 37-46 against Ulinzi.

In the only women’s Fixture, Nairobi Water comfortably inspected the guard of honor mounted by Ulinzi Ladies running away with a 42-27 win. Judy Angoh, Michelle Adhiambo and Merina Andola contributed 6 goals each for Nairobi Water while Alexie Ambani was the star attraction for Ulinzi Scoring 12 followed by Susan Wasike with 6 goals.

The Play offs continue Sunday at the Nyayo National Stadium Handball court from 9:30 am